The Institute will receive $13.8 million from JPMorgan Chase to continue its mission of advancing the post-service lives of transitioning service members, Veterans and military families.

Five years after cofounding the Institute for Veterans and Military Families (IVMF) at Syracuse University, JPMorgan Chase & Co. and the university announced today a renewed $13.8 million commitment through 2020 to support the Institute’s mission of advancing the post-service lives of America’s service members, Veterans and their families. Since its founding, Veterans and military spouses across the country, and around the world, have benefited from the IVMF’s innovative programs, research, policy analysis, and program evaluation. JPMorgan Chase remains the Institute’s largest corporate contributor.

Partnering with Syracuse University to create the IVMF was a natural extension of our firm’s long history of support to military service members, Veterans, and their families that extends back to World War I. The past five years have seen improvements across the board in how our nation understands and supports Veterans and military families, in no small way due to the work of the IVMF. Our continued collaboration will build on that growth and introduce new research and programs around employment, small business, and financial capability for Veterans and their families. 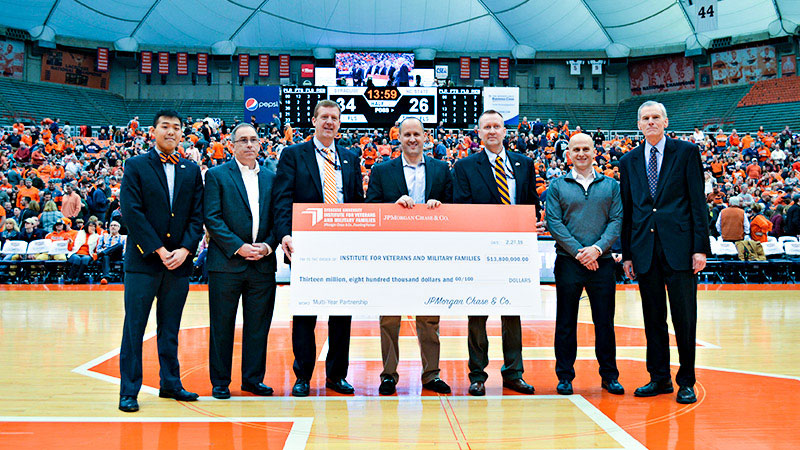 Syracuse University is incredibly proud to be working with JPMorgan Chase to support our nation’s military, their families and Veterans. The University has a long history of welcoming our Veterans from the post-World War II era to today, building the nationally renowned programs led by IVMF. JPMorgan Chase’s renewed commitment and support will make a real difference for today’s service members, impact generations to come and continue Syracuse’s legacy forward.

JPMorgan Chase co-founded the IVMF at Syracuse University, the first national institute in higher education focused on social, economic, education and policy issues impacting Veterans and their families. As part of its support for IVMF, JPMorgan Chase funds the Veterans Career Transition Program (VCTP), a tuition-free, online career development program for post-9/11 Veterans and military spouses. More than 4,600 certificates have been earned by over 3,400 Veterans and military spouses. Approximately 1,800 more are currently enrolled in the program.

Thanks to the support of our founding partner (JPMorgan Chase), the IVMF was created nearly five years ago as more than simply a “think tank” – but as an “action tank” focused on building from state-of-the-art research and policy, to in turn design and deliver state-of-the-art programming and training to the nation’s Veterans and their families. With JPMC’s ongoing support, I am confident that our partnership will enable us to continue to serve those who have served, much like we did in 2015, assisting more than 32,000 transitioning service members, Veterans and their families.

This partnership renewal is part of JPMorgan Chase’s ongoing commitment to the Veteran and military communities. This year marks the fifth anniversary of JPMorgan Chase’s Office of Military and Veterans Affairs, established to drive firm-wide Veteran-related initiatives. Since 2011, more than 10,000 Veterans have joined the ranks of JPMorgan Chase, and the firm has developed programs aimed at retaining and supporting them throughout their careers. These efforts include leading the Veteran Jobs Mission – previously the 100,000 Jobs Mission – a coalition founded in 2011 by JPMorgan Chase and 10 other companies with the goal of hiring 100,000 Veterans. Now 220 members strong, the coalition has collectively hired more than 314,000 Veterans, and is committed to hiring 1 million.

JPMorgan Chase & Co. (NYSE: JPM) is a leading global financial services Firm with assets of $3.2 trillion and operations worldwide. The Firm is a leader in investment banking, financial services for consumers and small businesses, commercial banking, financial transaction processing, and asset management. A component of the Dow Jones Industrial Average, JPMorgan Chase & Co. serves millions of customers in the United States and many of the world’s most prominent corporate, institutional and government clients under its J.P. Morgan and Chase brands.

About The Institute for Veterans and Military Families (IVMF)
The IVMF is the first interdisciplinary national institute in higher education focused on the social, economic, education and policy issues impacting Veterans and their families post-service. Through our focus on Veteran-facing programming, research and policy, employment and employer support, and community engagement, the institute provides in-depth analysis of the challenges facing the Veteran community, captures best practices and serves as a forum to facilitate new partnerships and strong relationships between the individuals and organizations committed to making a difference for Veterans and military families. Learn more about IVMF at http://vets.syr.edu.