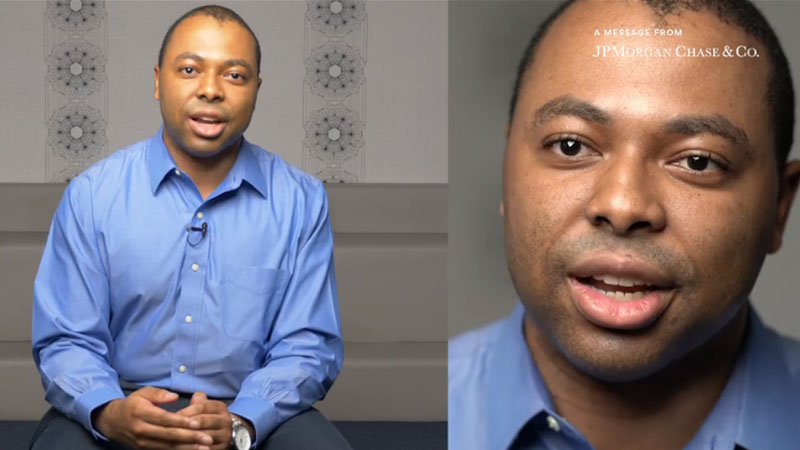 We provide training, informal buddies, and mentors to people on the spectrum for everything from career advice to lunch mates.

On screen: Wesley Gibbs in a split screen with video title on the right

On screen: Text A message from JPMorgan Chase & Co. in black font on a green background

On screen: Text Smarter Faster in bold black font on a green background

On screen: Word Transformation in white font on a black background

On screen: Text By Axios Studios in black font on a white background

Description: As Wesley starts to talk, split text screen moves to the left & a close-up for Wesley on the right side

Text on screen while Wesley is talking in the background: Amazing Things

Text On screen: The Big Picture in White font in a split screen with Wesley shown as walking within the office floor

James Mahoney: The Autism at Work program started at J.P.Morgan Chase 27 months ago...We provide training to people on the spectrum and informal buddies and formal mentorships to people for everything from career advice to lunch-mates.

Text On screen: Autism is a Global Condition

James Mahoney: We know that autism is a global condition. Unemployment is a global problem. We want to match talent to solve a problem. And you understand intentionally, autism is not on the problem side of that equation, but it's part of the solution.

Text On screen: Why It Matters

Wesley Gibbs: I'm overcoming my fear of interacting with people. I can always lean to my mentors...Really to be able to network and to connect with managers here at J.P.Morgan Chase and be able to have those conversations with them to try to determine what you want to do with your career.

James Mahoney: Autism at Work matters. Not just to J.P.Morgan Chase but to the country and really to the globe. We're providing training to the non-autistic - we call them typical - people in terms of understanding autism. When you think of the high unemployment rate of autistic people, underemployment rate of autistic people - the highest of any disability class, 80-90% in the US. And yet we know, there's a lot of hidden talent and ability in those numbers that simply aren't getting through the interview process. It's not charity, it's a talent play.

Wesley Gibbs: Since working at J.P.Morgan Chase I've done a much better job of taking care of myself. When I was looking for work that's the only thing I focused on... I really didn't place a lot of effort in exercising or eating right, but now that I'm fully employed I can now set some time on my own to work out and to take care of myself.

Text On screen: By the numbers

James Mahoney: We can see the proof in some of the analysis we've done…We saw after a period of six months, the autistic peers were equal in quality to their typical peers who had five, ten, fifteen years of experience. But the autistic individuals were 48% more productive.

Text On screen: What’s next?

James Mahoney: In the ideal world, the Autism at Work program is not a program. It doesn't exist and our hiring practices are just built into our business-as-usual DNA where we're just looking everywhere for talent.