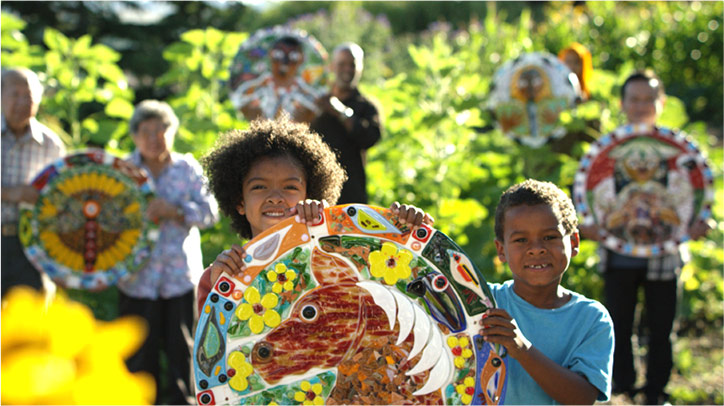 Two years of building connections and economic opportunity in a historic Seattle community.

As Washington State’s first public housing development and the country's first racially integrated housing development1, Yesler Terrace has been a part of Seattle’s history for nearly 80 years. And now, thanks to a strong public and private collaboration, it’s an inspiring part of the city’s future.

Beginning in 2012, resources started to come together for Yesler Terrace’s $290 million re-development. A team including members of the community began to transform the area into a vibrant and integrated mixed-income neighborhood. To help this process along, the Seattle Housing Authority teamed up with the JPMorgan Chase Foundation, which provided grants to support a variety of community-focused initiatives. Today, that investment is already starting to pay off.

It’s rare for a planner to see a project you have dreamed actually happen. 2

Combining educational programs, neighborhood planning and affordable, energy-efficient housing, the area is now fertile ground for growth and economic development. New residents, along with 67 families who were already part of the Yesler community, have moved into Kebero Court, the first new residential building of the redevelopment.3 Nearby, at the privately developed Anthem apartment building, new units are welcoming residents across the income spectrum. And more projects are in the works, from utilities and public garden plots to renovated infrastructure, including the newly unveiled 10th Ave South HillClimb.

Backed by a $750,000 grant from the JPMorgan Chase Foundation, the HillClimb is a connective walkway that’s transformed a tangle of wild blackberry bushes into a much-needed path between Yesler Terrace and Seattle’s Chinatown-International District.2 Now, residents and visitors have a safe and direct route between neighborhoods, access to mass transit and other previously hard-to-reach amenities, and shopping at the area’s many small businesses.

“We are proud to support the Seattle Housing Authority in the redevelopment of Yesler Terrace,” said Cat M., Global Philanthropy Manager of the JPMorgan Chase Foundation. “The integration of the HillClimb unites residents with neighboring communities and a pathway to prosperity.”

To keep momentum going, JPMorgan Chase and Seattle University have also launched RAMP, a $500,000 collaboration with a goal to provide training to more than 210 small businesses. Over three years, RAMP plans to help entrepreneurs generate an additional $8.5 million in revenue, by retaining or creating 150 full-time jobs—and building a diverse businesses community that reflects the surrounding area.

Some of the most exciting initiatives focus on building the community’s future. JPMorgan Chase has helped launch the innovative Cradle to College program, which is working with 25 organizations to provide tutoring, S.T.E.M. training and summer jobs to more than 850 students that could reshape their futures. This is critical work because currently 5.5 million young people nationally are neither working nor in school. However, 1 out of 3 American companies have openings for which they can’t find qualified workers.4 Creating pathways to high-quality training and skills empowers young community members to compete for jobs and, in turn, increase their access to economic opportunity.

Collaborations like Yesler Terrace are a living, breathing symbol of JPMorgan Chase's continued commitment to housing, education and economic development in Seattle and the nation. And as more communities look to create mixed-income urban communities, Yesler Terrace will serve as a shining example.