Joint convening revitalizes spirit of collaboration around employment, retention, and engagement of Veterans

In an effort to more effectively and efficiently engage the private sector in supporting Veterans, JPMorgan Chase & Co., Starbucks, and the Schultz Family Foundation (SFF) yesterday hosted a joint convening of the Veteran Jobs Mission and The Muster.

Led by JPMorgan Chase, the Veteran Jobs Mission is the nation’s largest private-sector coalition that promotes and facilitates Veteran employment with an ultimate goal to collectively hire 1 million Veterans. The Muster, an initiative of Starbucks and the Schultz Family Foundation, brings together participants from the private and public sectors in order to create actionable blueprints to improve the transition process for military service members.

The power of collaboration is one of the foremost reasons JPMorgan Chase joined 10 other companies in 2011 to form the Veteran Jobs Mission coalition, and the results – more than 314,000 Veterans hired by now 225 member companies – have exceeded expectations. Hosting our Spring meeting in conjunction with Starbucks, a recent addition to the Coalition, as well as the Schultz Family Foundation builds upon the spirit and success of our history of collaboration. 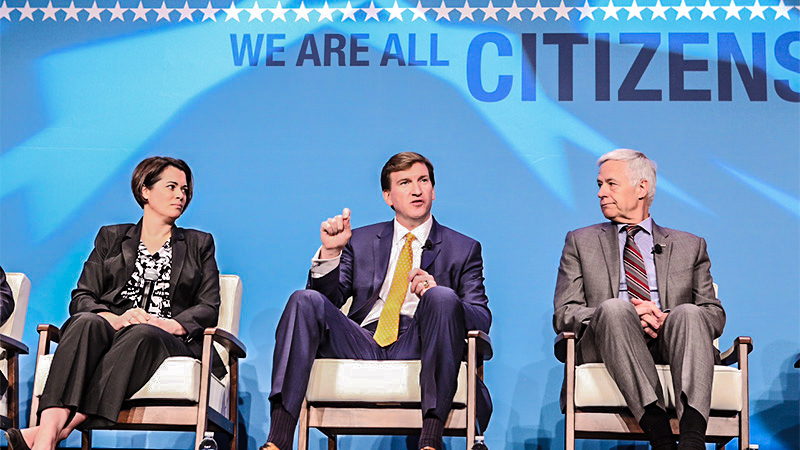 With 1 million veterans and military spouses transitioning to civilian life over the next five years, we are living in a transformative time where employers can thank them for their service, or we can work together to accelerate their careers and find ways to tap their common sense of duty, honor, and purpose to benefit our communities. We at Starbucks know first-hand how veterans and their spouses can be leaders in our stores and neighborhoods, and this Muster is a chance to share our success with others.

A 2015 report from the Center for a New American Security (CNAS) found that while support is still needed for many of the 21.2 million Veterans in the U.S., the military- and Veteran-service organization landscape remains fragmented. This is in part why JPMorgan Chase, Starbucks, and SFF hosted the April convening, bringing together more than 300 representatives from the private, public, and nonprofit sectors.

Less than 99 percent of our population has served in the military, and there is a lack of civilian understanding around the values and competencies that the military population can bring to the private sector. This means that not only are we as a country failing those who risked their lives to serve, we are also missing out on the talent and leadership of these individuals. Working in tandem with business, government and nonprofit leaders, we are aiming to bridge the divide between military and civilian communities by demonstrating that when we successfully engage veterans in meaningful post-military careers, it benefits everyone. 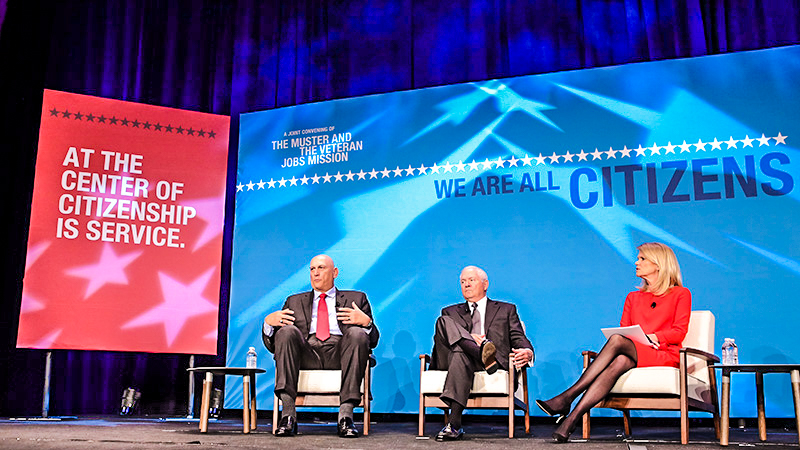 1.   Empowering companies by promoting military talent employment and retention strategies
2.   Catalyzing partnerships between Veteran service and civic organizations to create a full spectrum of solutions
3.   Breaking through the traditional Veteran narrative to reframe Veterans as civic assets and citizen leaders in their communities

JPMorgan Chase, on behalf of the Veteran Jobs Mission, has commissioned CNAS to conduct research regarding:

The morning of the convening, CNAS began conducting surveys with Veterans, HR representatives, and business leaders. Corporate retention data will also be reviewed to identify aggregate trends. The findings, expected by the close of 2016, will help to illuminate challenges and opportunities around retaining top Veteran and military talent within the private sector.

About Starbucks Commitment to Veterans and Military Spouses
Starbucks believes veterans bring considerable teamwork and leadership experience and are poised to be the next generation of America’s leaders. The general public, however, may not be able to fully understand and appreciate what veterans offer. We must work to ensure veterans are successfully transitioning back to civilian life through meaningful career opportunities. To this end, in 2013 Starbucks committed to hiring at least 10,000 veterans and military spouses by 2018. To date, Starbucks has surpassed the halfway mark of its hiring commitment, with more than 6,500 veteran and military spouse hires. In pursuit of its goal to help bridge the divide between military and civilian communities, Starbucks is also partnering with like-minded companies, nonprofits and government organizations to create successful transitions for military members and their spouses. Read more on Starbucks Newsroom, here.

About Schultz Family Foundation
Since 2000, the Schultz Family Foundation has focused on unlocking potential in populations facing temporary barriers to success, including disconnected youth and Veterans. The Foundation’s latest commitment to Veterans follows a commitment made by Starbucks in November to hiring 10,000 Veterans and military spouses over the next five years. For more information about the Foundation and its work: schultzfamilyfoundation.org

JPMorgan Chase & Co. (NYSE: JPM) is a leading global financial services Firm with assets of $3.2 trillion and operations worldwide. The Firm is a leader in investment banking, financial services for consumers and small businesses, commercial banking, financial transaction processing, and asset management. A component of the Dow Jones Industrial Average, JPMorgan Chase & Co. serves millions of customers in the United States and many of the world’s most prominent corporate, institutional and government clients under its J.P. Morgan and Chase brands.