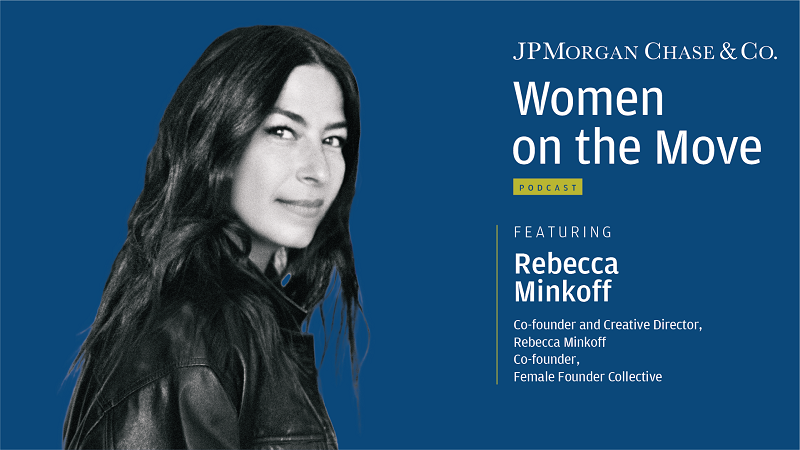 Rebecca Minkoff on female entrepreneurship and the importance of taking risks

Taking a risk—whether you end up succeeding or failing—is always the right thing to do, according to Rebecca Minkoff. Rebecca is co-founder and creative director of the global fashion brand Rebecca Minkoff, and co-founder of the Female Founder Collective, a nonprofit dedicated to enabling and empowering female-owned and led companies. In this episode, which draws from the JPMorgan Chase’s sixth annual Women on the Move Leadership Day, she discusses risk-taking, encouraging female entrepreneurship, and her new book, Fearless: The New Rules for Unlocking Creativity, Courage, and Success.

Getting comfortable with discomfort

Rebecca describes risk-taking as a no-loss scenario: Either you succeed and achieve something you didn’t think you could do, or you fail and learn something along the way. “I choose to look at taking risks as always positive,” she says. “I think that sometimes we wait for something to happen to us. And I like to tell women, the cavalry is not coming for us. We have to stick our own necks out to get what we want.”

Recognizing that the idea of sticking one’s neck out is scary, Rebecca urges women to practice risk-taking in small steps. “If you are like, I don't even know if I can do that, then practice with your friend, with someone who you trust, who you feel safe with,” she says. “Practice asking [your] boss for a raise or, ‘Here's how I'm going to ask to take on a project that no one thought I should take on.’” She likens this kind of practice to working out at the gym: Ultimately, you’ll build the muscle need to take risks in real-life situations.

After more than a decade growing her own successful business, Rebecca co-founded the Female Founder Collective in 2018 to support, develop, and elevate the founders of other female owned and led businesses. In just three years, the Collective has grown to a network on 9,000-plus female entrepreneurs and has helped women raise over $15 million in seed funding.

Rebecca says that she and her co-founder were committed to helping women access the resources and referrals needed to make their ventures successful. “Education was the biggest [missing] piece,” she explains. “As working women who've started their companies with a passion, they're not going to go back to Wharton or Harvard and get their master's degree.”

The Collective aims to fill that gap by bringing in experts for weekly or monthly informational programming as well as large networking events. A relationship with Women on the Move includes free one-on-one curated coaching for all Collective members. Rebecca says that that collaboration has been far and away the most requested and most attended of the Collective’s programming.

Looking to the future

Rebecca says the pandemic has been both a time of great challenge and great growth for her brand, Rebecca Minkoff. When stores shut down in March 2020, they watched 70 percent of their demand evaporate overnight. And yet, she said, it led to their company revamping its product line from more than 300 styles to a fraction of that. “So some of the silver linings from the pandemic is we've gotten more focused,” she notes. As for the future, she says it’s looking bright: They’ve recently launched a luggage line, a second fragrance comes out soon, and a home and lounge line will debut in January.

She’s equally excited for what she sees as the future of solo female entrepreneurship. As the pandemic has led to higher unemployment and a shifting of priorities for women, Rebecca notes the potential for opportunity that this environment has created. “My sincere hope is that they all start businesses and they all join the female founder collective and or take advantage of coaching services [from Women on the Move],” she says. Because if they can all start businesses, we're just at the beginning of the cycle of solo entrepreneurs.”

Listen on Spotify : Rebecca Minkoff on female entrepreneurship and the importance of taking risks