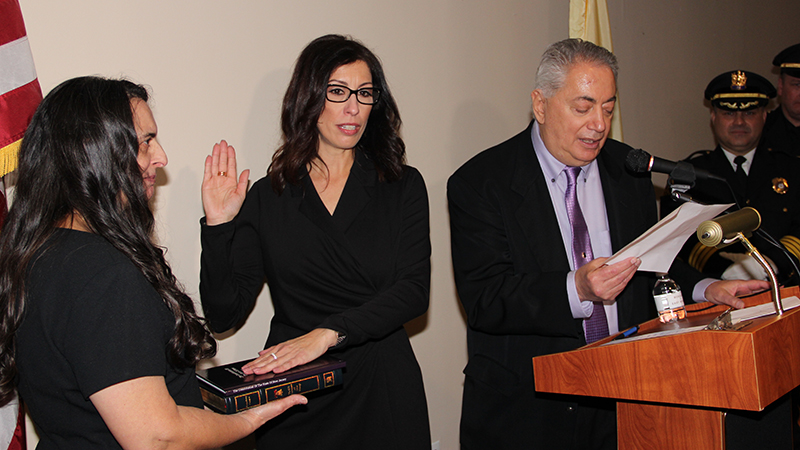 When Dina Grilo decided to run for Mayor of East Newark, NJ, there was no way she could anticipate that she'd be taking office during a pandemic. But with a solid plan (and some lessons gleaned from her work at JPMorgan Chase), she's helped her city survive...and thrive.

It was March 12, 2020, and Dina Grilo was facing a life-changing challenge.

Confronted with a global pandemic, Grilo—the newly elected mayor of East Newark, NJ—needed to put her borough on immediate lockdown.

She went to work and, over the next few months, Grilo and her employees worked to keep essential services going for the more than 3,000 residents of East Newark. They started a hotline for food and supplies and gathered a team of volunteers to help senior citizens, healthcare workers, residents with disabilities and first responders get the help they needed. Grilo's office informed the community about the borough's Meals on Wheels program for senior citizens and those with disabilities, and established a food pantry after food insecurity became a growing concern.

She even personally delivered county grant applications to every small business in her borough so they would know about the assistance that was available to them.

And, perhaps most impressive, Grilo did all of this in addition to her day job: Program Manager with the Global Office of Disability Inclusion at JPMorgan Chase.

Making a Difference in Her Community

Grilo, a resident of East Newark since her childhood, never planned on running for mayor. But in 2019, she became convinced that the incumbent—a 32-year veteran of the office—wasn't promoting the growth and inclusion that the community needed. Even then, she was still on the fence until she attended a municipal meeting where, in her opinion, the borough's leaders weren't valuing residents' opinions as they should.

“I looked at that and thought, 'We need to do better,'" she recalls. “If no one's going to step up and say something, then something has to change. I walked out of that meeting and made the decision to run for mayor."

With only four weeks to campaign before the electoral primary, Grilo quickly gathered a group of volunteers. It wasn't hard—she has friends in the community dating back to grammar school. “They would jokingly call me the mayor when we were kids because I always wanted to get things done," she says.

Armed with a one-page flyer, Grilo and her volunteers hit the campaign trail and won over voters: She upended the incumbent in the primary, then ran unopposed in the 2019 general election.

Now, just over a year into her four-year term, Grilo's administration has focused on several projects in East Newark, ranging from an agreement to renovate a 13-acre parcel of former factory buildings into 616 new apartments to the donation of six acres of riverfront land that will be turned into a public park. She's also addressed public safety by installing brighter streetlights, launching an accessible website, securing grants for road resurfacing and planning a renovation for the borough's community center, which has been closed for a decade.

And, of course, she's been on the front lines of the fight against the pandemic—a battle that had kept her working overtime.

“My weekends and nights are pretty booked," she says. “Most of the time everything is done at night because we all have our day jobs."

Business Skills for a Borough in Need

Running a small city and promoting corporate disability inclusion seem like completely different jobs, but Grilo says they require many of the same skills. “Because of my corporate work, I knew what we had to do with COVID-19: Assess the situation, identify the challenges and come up with solutions following government protocols," she explains. “My first priority was to keep the residents and borough employees as safe and healthy as possible. Then I wanted to do everything we could to help our businesspeople stay afloat."

Grilo's manager, Jim Sinocchi, who heads of the Global Office of Disability Inclusion at JPMorgan Chase, says she knows how to strike the delicate balance of being a leader in both the public and private sectors.

“The work she's doing for her community and for JPMorgan Chase definitely complement each other," Sinocchi says. “You can't underestimate how Dina's business acumen impacts her work on the local government level."

Inclusion in the Office—and in Government

“Inclusion is important to me," says Grilo, who has firsthand experience with gender diversity as the first woman mayor in her borough's 125-year history. And of the 12 municipalities in Hudson County, she is only the second female mayor ever.

“When I go into a meeting with my fellow mayors from Hudson County, I'm not the mayor 'who's a woman' — I'm Mayor Grilo," she says. “If you put your strengths, your ability and your leadership skills out there, they see you for the leader you are first."

That's not to say there haven't been exceptions: Not long after she took office, Grilo was meeting on borough business with several men who didn't include her in the conversation—not just once, but twice. It was a strange situation for Grilo because she's used to working in a professional environment where all opinions matter. She politely reminded them that at the end of the day, she would be the one who approves or rejects the proposal.

“When and if this happens to a woman, you need to call attention to it in the moment, just like you would if a child misbehaves," Grilo says. “You do it on the spot and make sure you correct the bad behavior."

Grilo had a lot of help in her path to the Mayor's office, from the friends who passed out flyers to New Jersey's First Lady, Tammy Murphy, who worked by her side greeting voters. But she credits her success to advice that she received from her parents, who immigrated to the US from Portugal: When you work hard for something you want, you value it more.

“For the little girls out there who may be insecure, or don't have role models growing up, you need to remember that you can be the change," Grilo says. “Even though the people who are leading may not look like you, it doesn't mean that you can't be the first to take on that role.

“My experience shows that you most certainly should."

Mentoring and Skilled Volunteerism Women on the Move