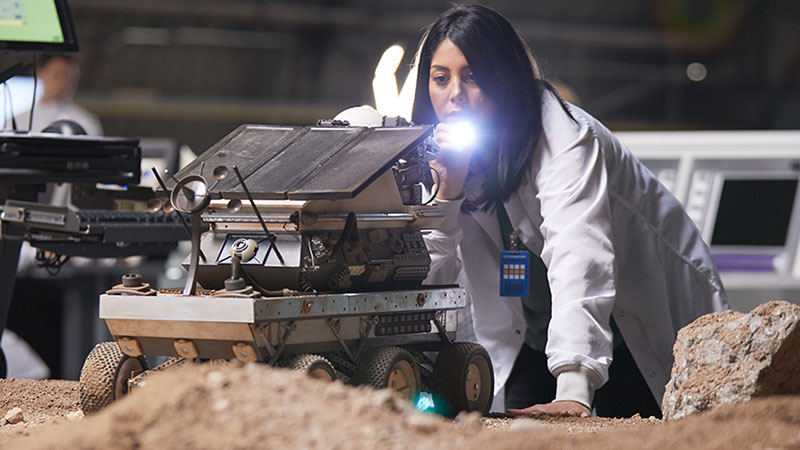 Diana Trujillo has always looked to the stars.

Growing up in Colombia during the 1980s, a place and time known for its civil unrest, she would stargaze to escape from the danger in her country. "I knew there had to be something better than this," she recalls, adding, "Somewhere better than where I was."

It's that yearning which pushed Trujillo to immigrate to the United States with only $300 in her pocket, pursue a degree in aerospace mechanics and biomechanics, and become one of the first Hispanic women to break into the aerospace industry.

Today, Trujillo oversees dozens of engineers and spearheads crucial projects, including a rover mission to Mars to explore the Gale Crater with one of the most technologically advanced rovers ever built.

We recently sat down with Trujillo to discuss resilience, the future of STEM (science, technology, engineering, mathematics), and her advice for thriving in a male-dominated industry. Here's an excerpt of the conversation, edited and condensed for clarity:

Q: You went from being a Hispanic immigrant who didn't speak English to one of the country's top female engineers. How did you turn what many would consider an adversity into an asset for your career?

It was an asset the whole time—I needed to decide how I would see it. My upbringing has taught me that you never give up. I'm not shy of asking for what I want. I don't run away from the problem; I run toward the problem. It's something my peers find very valuable, because they know I'm going to grab any issue by the horns.

Q: What's been the biggest challenge in your career so far and what did you do to overcome it?

Honestly, the biggest challenge has been to get over myself. I often text my husband saying, "Oh, man, I'm in a meeting with 17 people and I'm the only girl." So what if I'm the only girl? It doesn't make me less capable. I'm all about having more women in the workforce, and having more women of color in the workforce. So, when there aren't any other women in the room, I need to do my best to let other women in. If I'm too preoccupied about being alone, I won't perform.

Q: What advice do you have for women to own a room and own their place at the table?

It's not about you; it's about the goal. You need to focus on the goal. Nobody's going to argue with you if your discussion is all about the goal. When the goal is bigger than you, it doesn't matter who sets it because it's for the greater good of the team.

I think the industry's opening the possibilities for women by actually considering them. It's unfortunate that women don't get these opportunities simply because they aren't considered an option. The workforce finally understands that if we focus on the target, it doesn't matter who's solving it.

Q: What advice do you have for women who want to break into STEM?

Plan for your dreams, but first understand what you love so you can push through and get it done—no matter what adversities come your way.

Careers Women on the Move