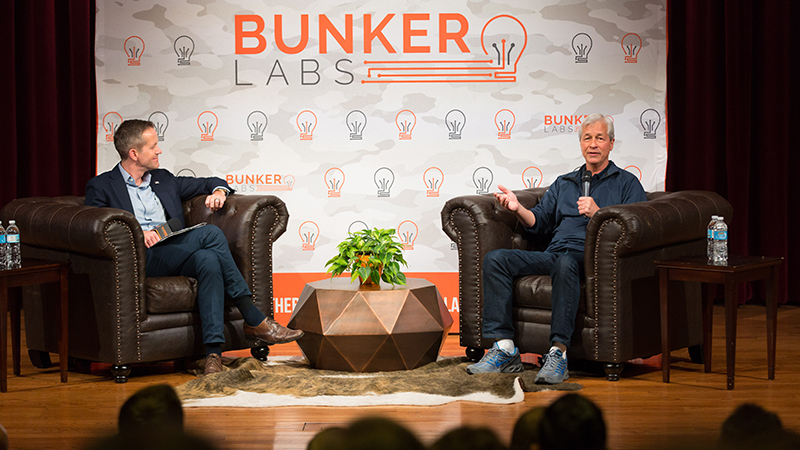 As the old Army slogan promises, the military is a place where many people go to be all that they can be. But what happens when they leave the military, and need to take that ambition into the private sector?

As the old Army slogan promises, the military is a place where many people go to be all that they can be. But what happens when they leave the military, and need to take that ambition into the private sector? For many of the 1 million veterans expected to transition out of the military in the next five years, one of the most pressing concerns is finding their next mission.

The energy and entrepreneurial spirit of Nashville's thriving economy could offer a solution for many of them. In 2018, employment in the city grew by more than 25 percent and unemployment dropped to below 3 percent. The tech sector, in particular, has been exploding, with local job growth growing by 47 percent in one year.

Bunker Labs, a national nonprofit focused on helping veteran entrepreneurs and military spouses open their own businesses, is on the front lines of the veteran employment challenge. In conjunction with JPMorgan Chase, it's working to bring together veterans and the Nashville business community through a variety of programs including the Muster Across America tour.

Mustering Out and Leaning In

This summer, Bunker Labs' brought its annual Muster Across America Tour to Nashville. A mix of pitch competition, workshop, and showcase, it gives Music City's entrepreneurial veterans an opportunity to build their local business community, join with their fellow business owners, and take their startups to the next level. During the convention, veterans have the opportunity to set up booths to network and showcase their businesses. They also have the chance to hear from panels of successful entrepreneurs about the latest tech trends and innovations.

For many attendees, the Muster Across America tour was also an opportunity to showcase their unique business ideas and concepts in a pitch competition. They took the stage to share the inspiration behind their businesses and their plans on how to grow within the market. These entrepreneurs competed for the coveted title of “Top Performing Veteran-Led Startup."

Partnering to Fuel the Local Economy

As one of the event's sponsors, JPMorgan Chairman and CEO Jamie Dimon took the stage and spoke to a crowd of more than 300 local veterans. During his conversation with Bunker Labs leadership on stage, Dimon highlighted the increasingly important role transitioning service members play in the United States economy.

The Muster Across America tour wasn't JPMorgan Chase's first experience with Bunker Labs. The bank began working with the organization in 2015 when it expanded its commitment to hiring veterans. This year, JPMorgan Chase is taking its support a step further with a $3 million commitment to help Bunker establish chapters in all 50 states by 2021.

It's not hard to see why JPMorgan Chase has focused on partnering with Bunker Labs. Not only are veteran small business owners making significant innovative contributions in their communities, but they are also major job creators. According to the Small Business Association, veteran-owned businesses employ nearly 5 million people with an annual payroll of $195 billion.

Nashville was one of seven cities to host a Muster Across America event. As the tour continues to roll through cities across the country, everyone will benefit from the platform these budding veteran entrepreneurs will have – showcasing their business ideas to people willing to listen, advise, and invest for the future.