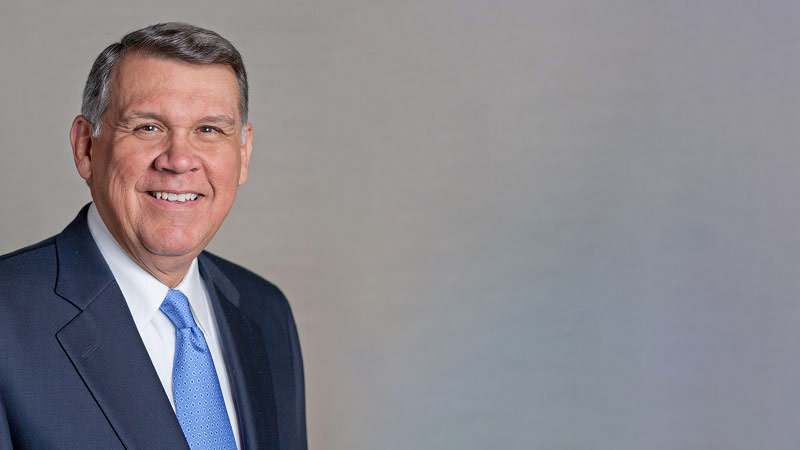 When I arrived to the country as a teenager from Cuba, I never questioned whether the American Dream was attainable. It was made evident in how I was brought up, in the opportunities afforded to me and my family and in the education I received.

But in recent times, economic instability has rocked this confidence in the American Dream, especially among the most vulnerable populations in the United States. But together, we have an opportunity to reshape and rebuild paths to prosperity and create new ones. Our company recognizes that driving inclusive economic growth is one of the most urgent challenges of our time. This is why we are investing significant resources over five years toward programs focused on boosting economic growth and expanding access to opportunity for those being left behind in today’s economy.

What can be more dire than to not have a place to sleep at night?

This is Mel Martinez, former Secretary of Housing and Urban Development,

and Regional Chair of JPMorgan Chase.

55 years ago Martinez came to the United States as a child refugee from Cuba,

first living in a refugee camp for children, and then a foster home,

before ultimately reuniting with his parents.

Whether you have a dry roof over your head or an environment that's not full of lead paint or,

frankly, the threat of crime and violence in your immediate vicinity,

these are things that I mean we sort of take for granted.

But everyone should have it.

He saw first-hand the struggle to provide decent public housing,

and how there's such an opportunity for public-private partnerships to help.

and we don't even say we have a major problem.

You see, the people in public housing, they're landlords, they're not developers.

It's a different skill set.

But how is this applied?

Okay, I've got 500 units of public housing that are terrible.

We need to modernize them.

Martinez says his work with JPMorgan Chase has shown signs of success in Detroit,

but they don't want to stop there.

I hope we can take the lessons learned, I'm sure all of which are not perfect,

but improve on them and replicate them.

We also leverage our data, networks, knowledge and expertise to help our cities and communities succeed. The Southeast is an important focus of this work. Throughout Florida, Georgia, Tennessee and the Carolinas, we are partnering with local leaders to identify ways we can remove barriers to opportunity and create pathways to economic mobility.

Economic growth throughout the region is creating new opportunities in burgeoning local industries. Transportation and logistics, technology, advanced manufacturing and all industries that support global trade are in high demand across the region. More than 50,000 jobs are expected to become available in these fields through 2020 in Florida alone.

But for the region to capitalize on these opportunities, we must prepare people with the skills they need to fill these jobs. Recognizing the need to bridge the skills gap, we are partnering with local organizations to prepare people with the skills needed to fill such high-demand jobs. In Tampa, we are working with the Hillsborough Community College to support the completion of a regional Advanced Transportation Technology Center (ATTC) that will train and build the region’s workforce. And in Jacksonville, we are supporting the work of Duval County Public Schools in the Aviation Academy that will position high school students to succeed in the field by acquiring experience and certifications that can help them transition into jobs with meaningful career opportunities.

Across South Florida, we supported the creation of three Cybersecurity and Trade and Logistics Academies for Miami-Dade County Public School students. As we broaden our footprint in the Carolinas, we have seen the tremendous opportunities created by local trade demands in the region. There, we are working with the Central Piedmont Community College to promote career opportunities in the fast-growing field—80,000 logistics-related jobs are projected in the next five years.

In Atlanta, we are working with Georgia Tech on a fast-track logistics and supply chain management program to help minority youth gain the skills needed for careers in the industry.

To make a substantial impact through such programs requires collaborative partnerships among leaders from the public, private and nonprofit sectors. This has been key to the progress we have achieved to date. That is why we are deeply proud of our partnerships with some of the most reputable education leaders in our cities and with city and government leaders committed to these principles.

About the Author:
Mel Martinez is Chairman of the Southeast U.S. and Latin America for JPMorgan Chase & Co. After more than a decade of public service, Mel joined JPMorgan Chase in July 2010. Based in Florida, he represents the firm to clients throughout the Southeast Americas – from individuals and businesses to large corporations, governments and nonprofit organizations.