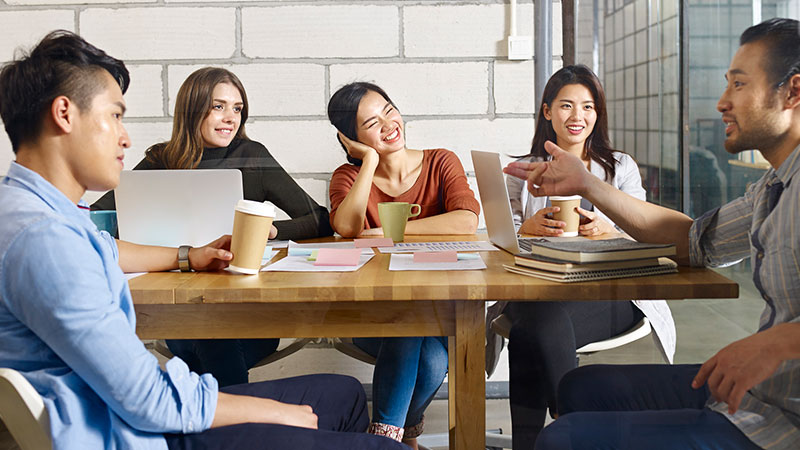 Big businesses and small businesses can learn from each other.
Originally published by OZY on May 3, 2018.

Seattle’s Macadons is one of the few macaroon companies daring enough to experiment with flavors like durian and taro. The Seattle-based and minority-owned small business is steadily gaining a loyal fan base who have come to rely on the exotically flavored treats. For a while, Macadons's co-founders Donna Chan and Michael Huynh were limited in how many macaroons they could sell. They mainly did custom orders for weddings and partnered with a couple of other local small businesses, which carried their wares. When they decided to expand, they set their sights on a large retailer just down the road: Starbucks. If they could sell their macaroons through the big coffee chain, they knew they’d be able to accelerate their profits.

Usually, small businesses like Macadons don’t have an easy route into bigger retailers. And when it comes to expanding their reach, minority-owned businesses often face systemic barriers that other businesses are not challenged with.

Enter Ascend 2020, a joint effort between JPMorgan Chase’s Small Business Forward Initiative and the University of Washington Foster School of Business’ Consulting and Business Development Center. The initiative aims to improve minority-owned small businesses’ access to the capital, education and new clients they need to thrive. Programs like Ascend 2020 are essential to overcoming the barriers that minority-owned businesses face every day. In fact, data from the U.S. Census Bureau’s Survey of Business Owners shows that:

Donna and Michael were just two of many owners who have benefited from Ascend 2020’s efforts. They helped introduce their product to Starbucks, and now their unique macaroons are carried in stores across Seattle.

Fabrice Saporito, the founder of Koble, a Boston-based matchmaking service that connects larger companies and smaller businesses, also believes such collaborations are vital in keeping small businesses competitive. U.S. Fortune 1000 companies generate close to $14 trillion in revenue,” he points out, adding those companies account for .01 percent of businesses. “Koble’s goal is to channel one-tenth of that revenue to purchases toward the 99.9 percent.” The result? More jobs and more equity all around.

Larger retailers that work with services like Koble and programs like Ascend 2020 win from such arrangements too. These efforts are especially useful for companies looking to intensify their diversity efforts.

“There is a real need within large companies to find qualified small businesses to make them part of the supply chain, but they just can’t find them,” Saporito says. “What we’re trying to do is help large enterprises and small businesses find each other and do business with one another.”

Of course, access to markets is just one aspect of the equation. Ascend 2020 is also dedicated to providing education to the businesses it works with. Through Ascend 2020, businesses participate in a six-month series of business classes and are positioned to receive new loans and investments. The businesses then have a chance to work with a team of students from the University of Washington Foster School of Business, where they receive personalized consulting and business plans to help them achieve their goals.

By fostering ecosystems in which minority-owned businesses can play on a level playing field, Ascend 2020 is helping retailers see that it’s not a game of David versus Goliath. Small businesses don’t have to compete with the giants, says Ivan Barron, who spearheads the Ascend 2020 Seattle program. “Big corporations can be key strategic allies for entrepreneurs looking to grow,” he points out, “small businesses can develop a symbiotic relationship with them.”