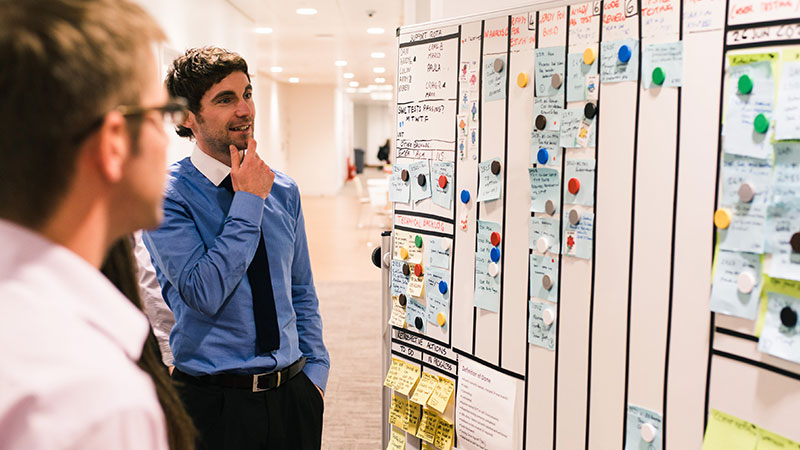 What if AI isn't taking your job but doing the drudge work so you can work on the stuff you enjoy?

In the movies and on television, artificial intelligence is typically depicted as something sinister that will upend our way of life. When it comes to AI in business, we often hear about it in relation to automation and the impending loss of jobs, but in what ways is AI changing companies and the larger economy that don’t involve doom-and-gloom mass unemployment predictions?

A recent survey of manufacturing and service industries from Tata Consultancy Services found that companies currently use AI more often in computer-to-computer activities than in automating human activities. One common application? Preventing electronic security breaches, which, rather than eliminating IT jobs, actually makes those personnel more valuable to employers, because they help firms prevent hacking attempts.

"We’re trying to accomplish something beyond human scale."

“Every white-collar job can be done better with the aid of AI,” says Pedro Domingos, author of The Master Algorithm: How the Quest for the Ultimate Learning Machine Will Remake Our World and a computer science professor at the University of Washington. “AI replaces the boring parts — the part of your job that’s routine grunt work,” he says, while it also allows for more scale. “If you’re doing research, you can have AI go out and look for relevant sources and information that otherwise you just wouldn’t have time for.”

Here are a few other ways AI is aiding companies without replacing employees:

Companies are using artificial intelligence to remove some of the unconscious bias from hiring decisions. “There are experiments that show that, naturally, the results of interviews are much more biased than what AI does,” says Domingos. In addition, “AI looks at résumés in greater numbers than humans would be able to, and selects the more promising candidates.” One company that’s doing this is called Blendoor. It uses analytics to help identify where there may be bias in the hiring process.

Some AI software can analyze and optimize marketing email subject lines to increase open rates. One company in the UK, Phrasee, claims their software can outperform humans by up to 10 percent when it comes to email open rates. This can mean millions more in revenue. There are also companies like Acquisio, which analyzes advertising performance across multiple channels like Adwords, Bing and social media and makes adjustments or suggestions about where advertising funds will be most effective. These are “tools that help people use data, not a replacement for people,” says Patrick H. Winston, a professor of artificial intelligence and computer science at MIT.

At large companies where they’re receiving millions or billions of calls a year, AI can help reduce the volume of calls sent to employees. Frequently people are calling in with similar questions, but with the help of AI customers are being provided additional communication channels, such as an app, to proactively address those common questions. By providing a better way to answer those prior to a call, the company is ultimately able to reduce call volume. “We’re using technology to understand those call recordings and investigate and implement technologies in to provide a better customer experience while creating more efficiency in our operations,” says Joe Kane, executive director of global technology strategy and partnerships at JPMorgan Chase. “We’re also giving our customers better channels versus picking up the phone … to accomplish something beyond human scale.”

Energy companies can use AI to help customers reduce their electricity bills, saving them money while helping the environment. Companies can also optimize their own energy use and cut down on the cost of electricity. Insurance companies, meanwhile, can base their premiums on AI models that more accurately access risk. “Before, they might not insure the ones who felt like a high risk or charge them too much,” says Domingos, “or they would charge them too little and then it would cost [the company] money.”

A number of companies, particularly in energy and transportation, use AI image processing technology to inspect infrastructure and prevent equipment failure or leaks before they happen. “If they fail first and then you fix them, it’s very expensive,” says Domingos. “You want to predict if something needs attention now and point to where it’s useful for [employees] to go to.”

Learn how technology is connecting ideas and colleagues across the globe.