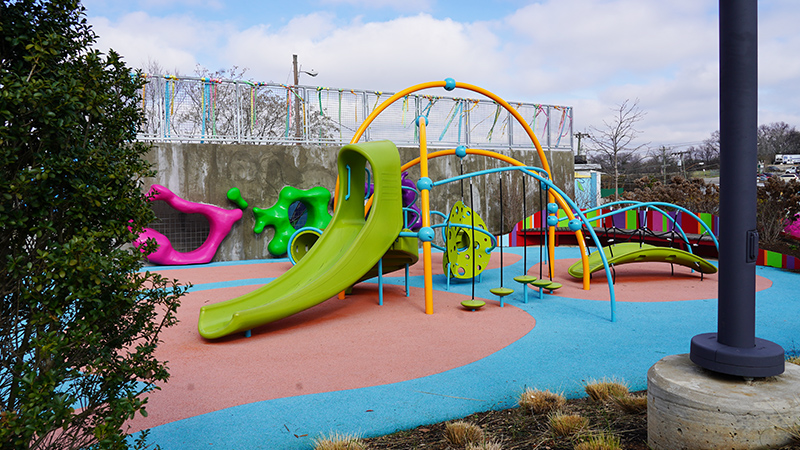 How a Preschool Built a Park...and a Park Is Building a Community

In a little park, south of downtown Nashville, preschool children are partnering with JPMorgan Chase to transform a neighborhood.

Driving south of Nashville on Nolensville Pike, you won't have any trouble finding a used tire lot or an auto repair shop, but finding a park or nice place to walk is a little more difficult. Many of the cars speeding down Nolansville Pike take the speed limit as a suggestion, and the lack of sidewalks makes it a tough place to be a pedestrian.

In a recent survey, Walk Bike Nashville determined that one spot on the pike, between Harding Place and Welshwood Drive, is the city's most dangerous intersection. In the past five years 16 pedestrians have been hit trying to cross the street there. Six have been killed.

Just a few miles down the same stretch of road sits Casa Azafrán Early Learning Center, where 92 students attend a Pre-K program. The highly trained staff works to give the children the skills they need to excel throughout their academic career.

Outside, there is a fenced in space with a small garden where students have planted seeds and can watch Mother Nature work from the nearby window. But when it comes to learning opportunities beyond the walls of Casa Azafrán, the kids needed more. “We knew the kids and the community could use some green space," says Susan McClain, the multi-classroom leader at the early learning center.

Luckily, the center shares a building with some supportive neighbors.

Conexión Américas, the lead non-profit organization that oversees Casa Azafrán, worked with the city to buy the land directly next to their building—an old used car lot. It wasn't exactly a welcoming space for children, but Conexión had big plans for it. They decided to turn it into a park.

Through community fundraising, Conexión Américas was able to design and construct a friendly green space with playground equipment for the kids. The school was overjoyed. “Our kids came in as part of the groundbreaking ceremony," McClain says. “They even gave them little shovels."

The park is full of color, with play equipment and a giant artificial mama snail and her babies inhabiting the area where kids can explore and exercise. But the park doesn't just benefit the children. There's an open space surrounded with picnic tables under a covering to keep visitors dry when it rains, and on Wednesdays in the late spring and summer, local farmers set up produce stands. As part of the deal to build the park, the city took over maintaining the space in 2018 to make sure it stays clean and safe for the entire community.

Still, no one gets more use out of the space than Casa Azafrán's young learners. “It's a joy to see them and all the creative ways our teachers use the space," McClain says. “We get out there every day the weather allows. The kids love it."

As wonderful as the park was, it still sat alongside Nolansville Pike, a few feet from whizzing cars and dangerous intersections. For their next step, Conexión Américas decided to tackle the pedestrian concerns on its doorstep. The organization pushed the city for a stoplight, a crosswalk and a pedestrian island. In 2017, all three were approved.

The new safety measures have transformed the area, making the park, the early learning center, Casa Azafrán, and Conexión Américas more accessible for the entire community. “Our teachers even build safety into the curriculum. We have daily conversations around safety to make sure kids understand," McClain says.

A safer pedestrian space is also good for business. More and more local businesses are opening their doors and providing some color to Nolensville Pike. “It's a beautiful sight when you drive past it," McClain explains. “The neighborhood understands how important Azafrán Park is and appreciates how well it's taken care of."