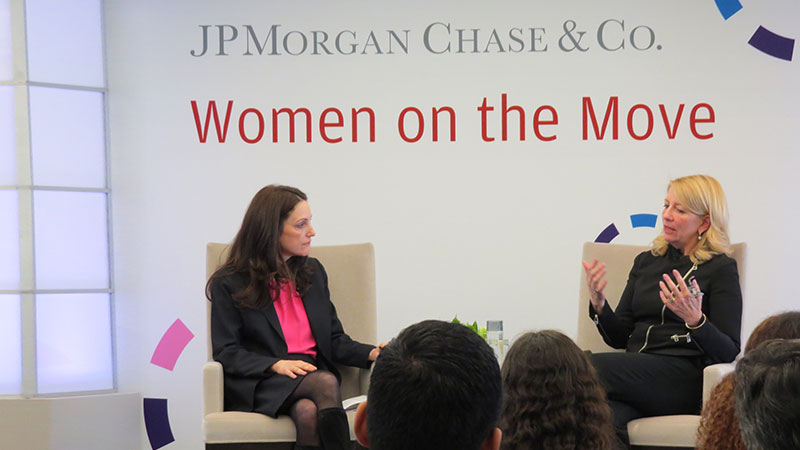 A Gap that Costs $28 Trillion

Cathy Russell, U.S. Ambassador-at-Large for Global Women’s Issues, spoke about her mission to advance women’s political and economic participation during a visit to our New York headquarters.

Cathy Russell, U.S. Ambassador-at-Large for Global Women’s Issues, and Jill Blickstein, head of strategy for Corporate Responsibility at JPMorgan Chase, spoke to employees about the barriers to economic participation that women face around the world.

Displaying photographs of a government board of directors, a peace negotiation meeting, a group of Hollywood executives, and a head of state delegation to the Queen of England, Ambassador Russell highlighted the disparity in the number of women and men in senior “decision-making” positions around the world. In fact, only one of the photos she showed – the state delegation – showed any women at all.

During a fireside chat with Jill Blickstein, head of strategy for Corporate Responsibility at JPMorgan Chase, the Ambassador spoke to a full room of women and men from across the firm about some of the key barriers to economic participation that women face around the world. The conversation explored the Ambassador’s role in advancing international priorities across cultures and industries.

"Women are vastly underrepresented in the places where the important decisions are made. Whether these decisions are about business, policy, peace, or even their own bodies, the problem is that too often women’s voices and perspectives – most importantly their perspectives – aren’t being heard." 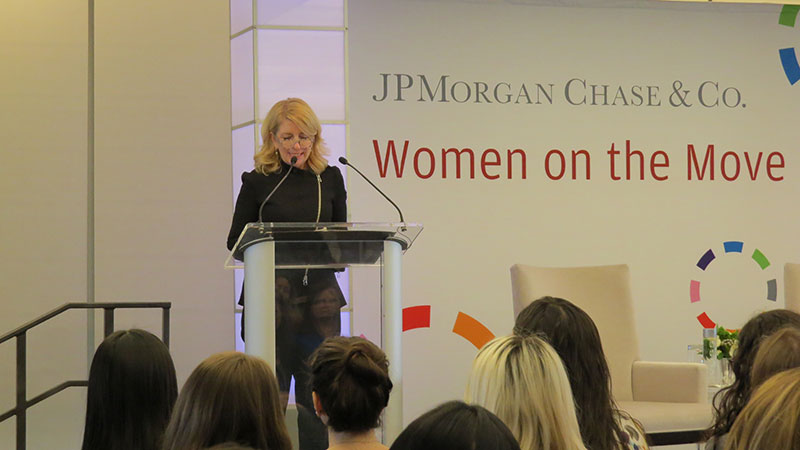 Ambassador Russell cited a recent McKinsey report that found if women played identical roles to men in the labor market, global GDP would increase $28 trillion, or by 25% by 2025.

The problem, Russell said, is although research has proven that diverse perspectives benefit companies and economies, only 46% of women participate in the global workforce, compared to 72% of men. Making matters worse, there are an estimated 250 million girls living in poverty around the world, and 62 million girls not in school. Russell cited a recent McKinsey report that found if women played identical roles to men in the labor market, global GDP would increase $28 trillion, or 25% by 2025.

One opportunity for women – especially in developing countries – is entrepreneurship, which offers a way for women to enter the workforce by filling gaps in the labor market. However, according to Russell, around 70% of women-owned small and medium enterprises remain underserved by financial institutions, resulting in a credit cap of nearly $300 billion.

The Ambassador explained that the cultural barriers to economic empowerment are different around the world. Domestically, there are issues around access to adequate and affordable child care, while other developed nations, such as Japan, struggle with an entrenched perception that women should forgo their careers when they start a family.

In many parts of the world, issues of physical safety and domestic violence still prevent and discourage women from seeking employment. For this reason, she sees including men and boys in the conversation as an important part of her role.

"When I first started, I would look at my schedule and it would be me meeting with all these women’s groups. I decided it wasn’t enough. We need to talk to men and understand their perspectives as well."

Working Towards a Solution

Russell reminded the audience that one person can make a difference. She said being informed and engaged with the topic in our own lives is as important as paying attention to and supporting some of the great work done by non-profits and nongovernmental organizations. U.S.-based companies with a presence abroad are in in a good position to lead the charge, she said, since they can actively employ women and challenge policies and social norms on the ground.