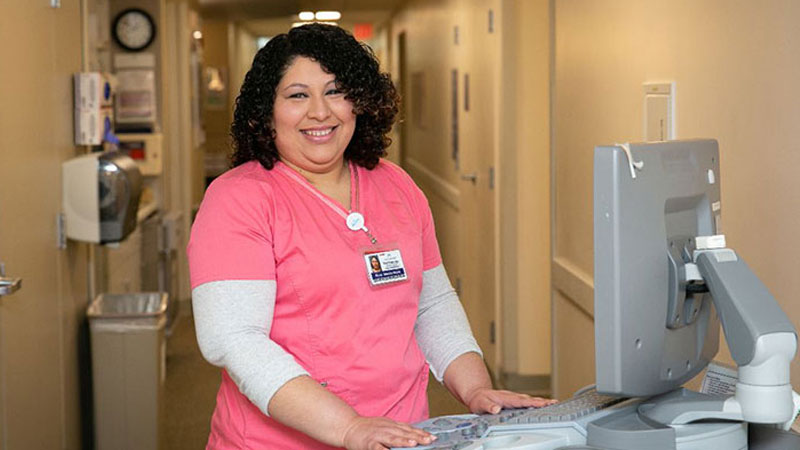 From Homeless to Healthcare Assistant

With support from JPMorgan Chase and Jewish Vocational Service (JVS), Nuria Reyes received the training she needed to secure a job and provide for herself and her daughter.

Nuria Reyes never expected to end up homeless. Valedictorian of her high school, she had a good job as a medical assistant and had waited to start a family until she and her husband felt they could afford one.

But life doesn’t always go as planned. Reyes’s daughter, Emily, was born with bilateral hip dysplasia and brittle bones. When the doctors told the new parents that their daughter would require surgeries, braces and physical therapy, Reyes’s husband decided he couldn’t handle a sick child and ended the marriage.

And like that, Reyes found herself a single mom to a child with special needs in one of the nation’s most expensive cities. She got a second job, and worked sixteen hour days.

Driving between jobs one day, Reyes was hit by a car. She required three weeks in the hospital, and six months of physical therapy. By the time she was healthy enough to return to work, one employer had fired her. Making matters worse, it was time for Emily’s first surgery. Her remaining job paid her $14 an hour, but the cheapest professional babysitter – someone who could care for Emily’s post-surgical wounds and rotate the child to avoid bedsores – cost $25 an hour.

“That’s when I knew that I couldn’t go back to work,” explains Reyes. “Emily needed me more than I needed a job.”

From Homeless to Healthcare Assistant: One Woman’s Journey to Self-Sufficiency

I did everything the way it was supposed to happen. I went to school, I was a valedictorian, I got a career as a medical assistant. I met this guy, I married him, and then when we were financially ready to have kids that's when I got pregnant.

The day Emily was born everything changed. Emily was born with bilateral hip dysplasia and brittle bones. The doctor's came and started explaining all the things that were going to happen: surgeries, braces, casts, physical therapies.

My husband said, “We can't do that. We are not prepared for a sick child.” He said I had to choose between him or being a mom. And there was no choice, this was my baby. So, he left me in the hospital, and he kicked me out of the apartment, so I had to get a second job.

So I was working 16 hours a day, and I was going from one job to the next on the freeway 101. And this kid come, and he hits me from behind and he makes my car flip to the other side of the freeway.

I had to stay in the hospital for three weeks. I had to go to physical therapy, and that took six months. My employers, they end up laying me off. When I was ready to go back to work it was time for Emily's first surgery. I went to look into a professional babysitter. I think the cheapest one I found was $25.00 an hour, and I was making $14.00.

. I knew that I couldn't go to work. She needed me more than I needed a job, so I ran out of my savings. I sold the TV, I had to sell her crib. And it came to a point that I had nothing more to sell, and I still had no money. So my only option was going to a shelter.

Being in a shelter made me feel like the worst mom ever. I used to look at Emily sleeping and I would just start to cry thinking this is not where she's supposed to be. I tried to shield her from everything. I used to stay awake at night because there were drug addicts that were screaming.

So I just stayed awake during the night to make sure that no one would break the door down. I got her some earplugs so she can hear her music during the night, and she wouldn't hear what was going on.

After seven months I was transferred to Claire House, which is a housing program for parents with children. I tried to apply for jobs, but as soon as they see that you haven't worked within two years they don't even consider you for jobs.

I was applying to 50 jobs a day, and I was not getting nowhere. Then Claire House told me about this medical refreshment program at JVS. It was six weeks of classes, six weeks of paid externship at Kaiser Permanente.

The pay actually caught my eyes, once I was in the program I realized it was so much more. JVS showed me how to build my resume, be professional, and interview well.

Now I'm living in a two bedroom apartment. I have a roof over my head, and we have food on the table. Emily inspires me every day. The doctors expected Emily not to walk, and she is walking.

Reyes spent down her savings. Then she sold her television. Then Emily’s crib. Soon she had nothing left to sell. All the while, Reyes searched feverishly for work, but between the physical therapy for the car accident and Emily’s surgery, she had been out of work for nearly a year, and the long period of unemployment deterred potential employers.

Absent other options, Reyes and Emily moved into a homeless shelter, where they stayed for seven months while Reyes continued applying for jobs to no avail.

Then they moved into Compass’ Clara House, an 18 to 24-month live-in program that helps families build lasting success. There, Reyes learned about the Medical Assistant Refresher Program at Jewish Vocational Service (JVS), a nonprofit that helps Bay Area residents to build skills and find work to achieve self-sufficiency. The program, which is funded in part by JPMorgan Chase, provides certified medical assistants with five weeks of classroom training and a six-week paid externship with Bay Area-based Kaiser Permanente–one of the nation’s largest healthcare systems.

Over the past six years, JPMorgan Chase has invested more than a million dollars in JVS to support healthcare training programs that provide job seekers, like Reyes, with the specific skills necessary to fill immediate job openings in the healthcare industry. The programs narrowly target healthcare because the industry is one of the fastest-growing in the country, and offers well-paying jobs, with salaries averaging nearly $53,000.1

By helping people to acquire the necessary skills to secure good jobs, JVS and JPMorgan Chase are not only helping to reduce income inequality in the Bay Area, but also increasing economic mobility. Just ask Reyes, who completed the JVS program in April 2018. Based on her performance during the externship, Reyes was hired full-time at Kaiser-Permanente. She now earns $27 an hour. Plus benefits.

“JVS showed me how to build my resume, be professional, and interview well. And at my externship I got to build my skills and learn how Kaiser-Permanente works. Because of that program, I’m now living in a two-bedroom apartment. We have a roof over our heads and we have food on the table,” says Reyes.

“The doctors expected Emily not to walk, and she’s walking. She’s running. She’s jumping. She’s very happy. And she inspires me every day.”