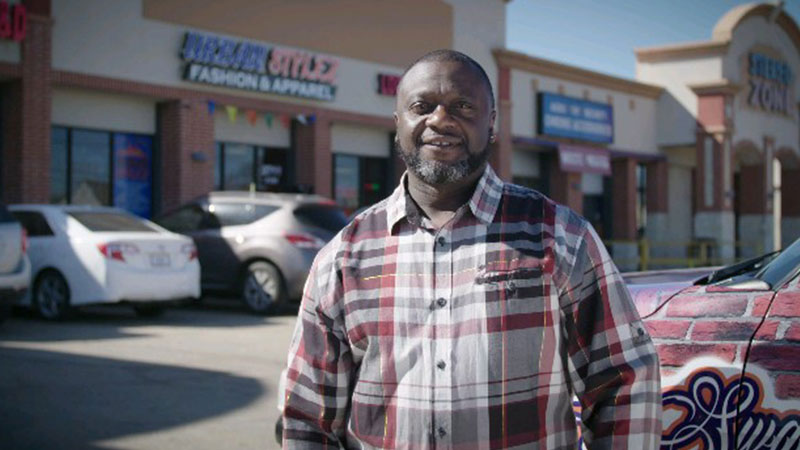 Faces of Opportunity: From Incarceration to Successful Business Owner

Orlander Johnson took the leap with help from JPMorgan Chase.

Orlander Johnson had a good childhood in a supportive home in Dallas. As a teenager, he played football and had bright prospects. He even started college.

But then he ran with the wrong crowd and ended up dropping out of school. He found himself in and out of prison, including serving a five-year sentence in a federal facility for nonviolent drug charges.

His turning point came when the mother of his children died while he was incarcerated. He wasn't able to make it to the funeral or to be there for his children. He describes the time in his life as "one of the hardest things I've had to deal with."

Faces of Opportunity: From Incarceration to Successful Business Owner

My name is Orlander Johnson, owner of Urban Stylez. Dallas number one swag shop. Where you come and get the flyest gear.

I moved here when I was 14. Played a little football and ended up going to college for a couple years. I guess you can say I rebelled and I took to the streets. You know, pick up the bag and hang out on the corner, you know, thuggin'.

In 2007, I got a five year sentence. During that time period is when the mother of my children passed away, so, that time away was probably one of the hardest things that I had to deal with.

My brain couldn't calculate how this is happening and I'm in this particular place and helpless. The kids are helpless.

From that point on, I just tried to find something else to live for other than myself, you know?

Coming out of prison, I didn't have the ability to go to the bank and get a loan and that's when LiftFund came into play.

I met Orlander back in 2014 and we're help him with a small $5,000 dollar loan. LiftFund is a non-profit organization that helps individuals that can't get credit through traditional sources.

He was able to come to us to establish some credit then turn around and obtain a larger loan and is now bankable. This entire process has allowed me to show my kids that have matured and become responsible.

That's when Orlander decided to "find something else to live for other than myself." He participated in a special entrepreneurial program in prison, which was funded in part by JPMorgan Chase, and then proceeded to start his own business when he transitioned back to civilian life.

Urban Stylz, an apparel and accessories store in Dallas, needed the same seed support and assistance that all businesses need to succeed.

Orlander found that because he had no credit established, though, he was challenged in accessing traditional business loans. That’s when he found LiftFund. JPMorgan Chase invests in the nonprofit, which is a Community Development Financial Institution (CDFI) that offers low-interest small business loans to entrepreneurs that needed access to capital. He was able to secure a small loan that helped him get his business off the ground. That initial loan allowed him to establish credit, which opened up the door for him access to additional loans, including from larger financial institutions.

More than just a traditional loan fund, LiftFund also offers critical technical assistance and advising to business owners like Orlander who are just starting out and can benefit from the added resources and guidance.

Today, Urban Stylz is a successful apparel and accessories store in Dallas that continues to grow. More than that, Orlander has become a community pillar, a family man who sets an admirable example for his children and grandchildren and for kids coming of age in the neighborhood, many of whom come by his store regularly.

"This entire process has allowed me to show my kids that I matured and became responsible. It's a blessing," said Orlander.