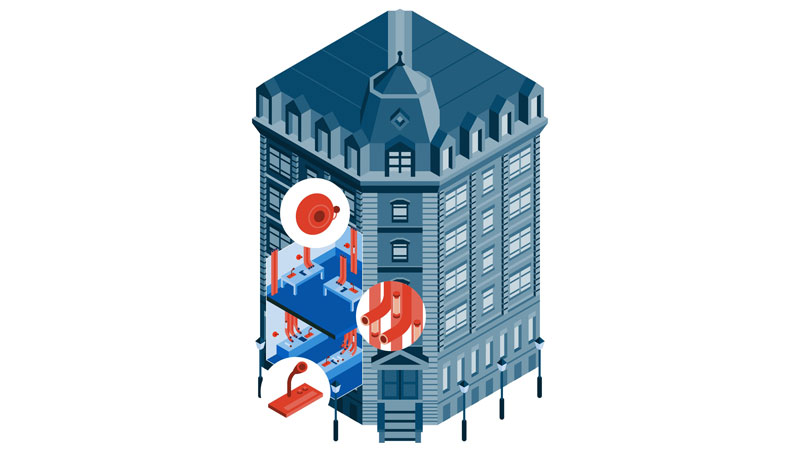 Designing Impact: More Than a Century of Innovation Led to the Smart Buildings of Today

Imagine it’s summer in New York City, 1883. You’re staying late at the office. As the sun goes down, you light a match and ignite the gas lamps. Sweat drips down your back; it’s a humid 96 degrees. Coal keeps the steam elevators operating, and its heavy, sulfurous smell wafts into your office.

The clean, cool, energy-efficient buildings we take for granted today are the result of more than 150 years of innovation. Gas lamps and intercoms morphed into LED bulbs and Wi-Fi. As early as the 1960s, office buildings featured so much technology that they required robust management systems. The systems promised more efficiency, but they came at a cost too high for most companies.

According to the Department of Energy1, close to five million commercial buildings dotted the U.S. by the early 2000s. They accounted for 18 percent of the nation’s overall energy use, and about 17 percent of electricity usage in commercial buildings simply kept the lights on 2. Estimates showed that building management systems could reduce that energy use by 6 percent — the equivalent of taking nearly 20 million cars off the road3 — yet only 10 percent of office buildings in the U.S. had them 4. Much of the decrease would come from using long-lasting LED bulbs rather than older technologies, such as incandescent bulbs, yet a 2012 survey by the U.S. Energy Information Administration found that only 3 percent of lighting in extant commercial buildings came from LEDs 5.

Changes in technology and cost started to shift this trend in the post-recession years and private enterprises solidified their commitments to more environmentally sound, energy-efficient operations, ushering in a new era. Through an extensive renovation of its global headquarters in New York in 2012, for example, JPMorgan Chase cut electricity consumption by half and began saving one million gallons of water a year6.

As part of JPMorgan Chase’s broader commitment to source renewable energy for 100 percent of its power needs by 2020, the company collaborated with Current, powered by GE, and is installing LED bulbs and an intelligent environments platform that will drive energy efficiency and business productivity at nearly 4,500 of the bank’s branches. The intelligent environments platform, a more advanced version of a traditional building management system, is analogous to the smart phone operating system in that it is open and offers a variety of lighting, energy efficiency, and business productivity apps to be integrated by corporate customers. This intelligent environments platform is also a key reason that as more apps are dreamed up, smart buildings will continue to be the discovery zone for new solutions and milestones that we can’t even imagine today. 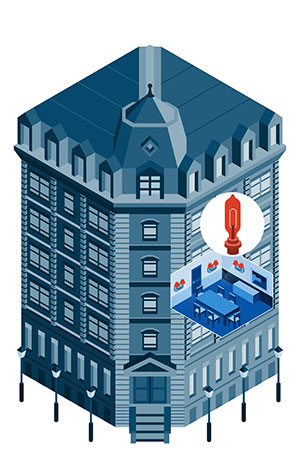 Thomas Edison used a carbonized cotton filament — the part of the light bulb that glows — to produce the first long-burning light bulb. It lasted for an impressive 13 and a half hours. His work built on that of inventors Joseph Swan and Warren De la Rue. It’s debatable who invented the light bulb, but who commercialized it? That is a crown only Edison wears. "We will make electricity so cheap that only the rich will burn candles," said Edison. Much-needed capital to fund these early experiments at Edison Electric Light Company came from the company’s individual partners as well as Drexel Morgan & Co., which would go on to become JPMorgan Chase. Within a year, Edison had added carbonized bamboo as a filament, a move that resulted in 1,200 hours of light from a single bulb. 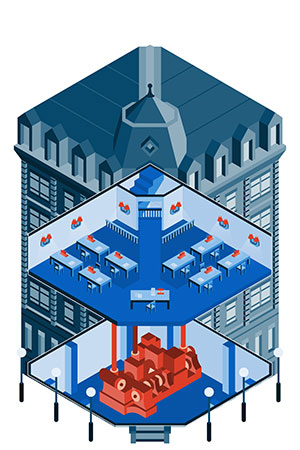 In just a few short years, Edison, ever the salesman, convinced the city of New York to allow him to light the length of Pearl Street. To do this he not only needed hundred of bulbs, but also a power station to keep them glowing. At 3 p.m. on September 4, 1882, Edison’s station (another invention) roared to life, and 400 electric light bulbs cast a glow over lower Manhattan. A few months later, the Drexel Morgan & Co. headquarters on Wall Street made the switch to electric bulbs. The company continued to show its support a decade later, when it arranged a merger between Edison’s company with Thomson-Houston Electric, thus forming General Electric. 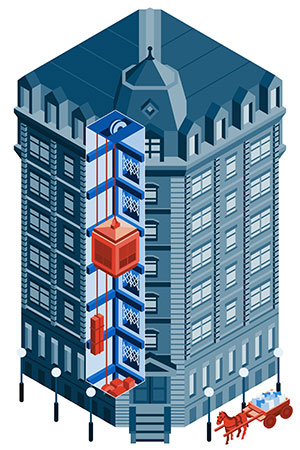 The first skyscraper, the 10-story Home Insurance Building, opened in Chicago. Not to be outdone, New York City followed with the Tower Building in 1889. The tall structures were made more feasible as places of business thanks to the steam-powered elevators. To power these buildings, horse-drawn carts lined up with a constant delivery of coal needed to keep the buildings running. Progress smelled like burning coal.

Reference: The American Skyscraper, 1850-1940: A Celebration of Height by Joseph J. Korom and https://www.theguardian.com/cities/2015/apr/02/worlds-first-skyscraper-chicago-home-insurance-building-history 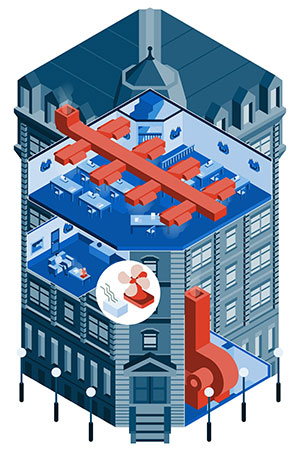 Inventor Alfred Wolff turned Carnegie Hall into an experiment in cooling and ventilation by combining fans with large blocks of ice. Within five years, he would install the first true air-conditioning system in the New York Stock Exchange, which regulated both temperature and humidity. 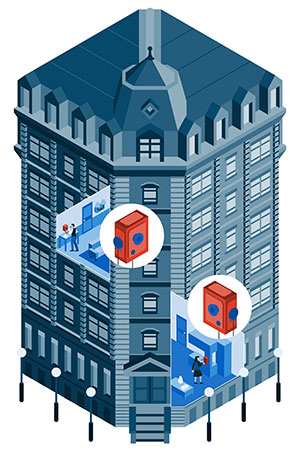 Early attempts at interoffice communication were a mix of “electric call-bells, speaking tubes and pneumatic [activated by gas or air] tubes,” according to The Boston Globe. Then came the Kellogg intercom, patented in 1894. Intercoms grew in popularity because they were less expensive to install than telephone systems. Even though the first telephone was demonstrated in 1876, it took another 25 years for American Telephone and Telegraph (AT&T) to complete a national telephone network, permitting business communications to reach far beyond the adjacent floor. 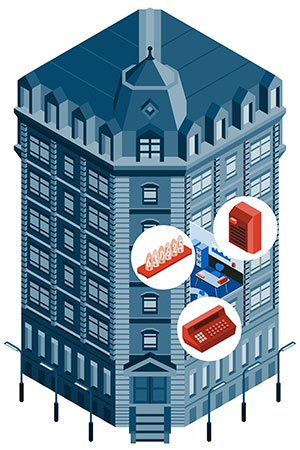 The never-ending race to light the world arrived at the light-emitting diode, better known as the LED. General Electric's Nick Holonyak invented a red diode that first appeared to consumers in the 1970s on calculator displays and as indicator lights on devices like remote controls, replacing small but power-hungry incandescent bulbs. 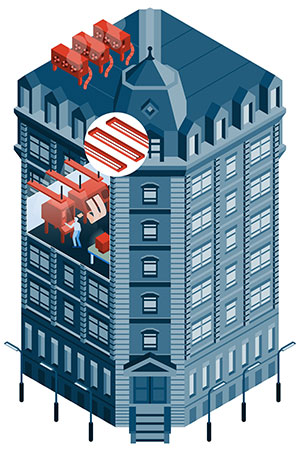 Oil embargoes in the 1970s triggered an energy crisis in the U.S. Expensive computerized systems for controlling many aspects of a building–such as air-conditioning, lighting, mechanics–which appeared in the 1960s, became more attractive. They also became more sophisticated. Night and day schedules for lighting and the HVAC (heating, ventilation, and air-conditioning) systems were adopted to sync with changing employee numbers throughout a 24-hour cycle.

But reducing energy consumption is not always simple. As buildings tightened windows and walls to prevent climate-controlled air from escaping, indoor pollutants and carbon dioxide increased. This could impact employee productivity by as much as 50 percent, a Harvard study would later find. A truly intelligent building management system was still lacking. 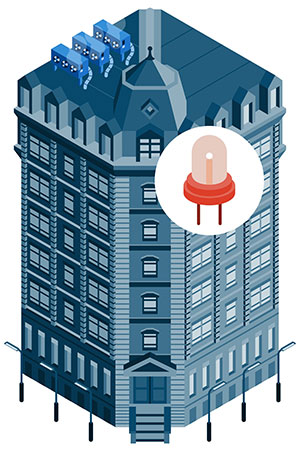 The invention of the blue LED by Professors Shuji Nakamura, Isamu Akasaki, and Hiroshi Amano continued to push the LED along. They would later win a Nobel Prize for their work. The blue diode combined with a yellow fluorescent made the resulting light seem white to the eye. White LEDs would soon become a mix of red, green, and blue light. LEDs went on the market, but were relatively inefficient and expensive to produce commercially. 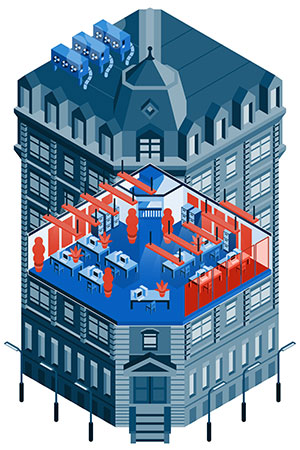 JPMorgan Chase collaborated with GE once again to pursue innovation and sustainability. With the help of Current, powered by GE, the world’s largest single-order of LEDs was installed across nearly 4,500 of the bank’s branches and 60 of their office sites. The initiative is on track to cut lighting energy usage in half. That is equal to taking 27,000 cars off the road or preserving more than 100,000 acres of forest. When the project is completed, an additional 25 million square feet of commercial space will be lit by energy-saving LEDs.

The collaboration will also add an intelligent environments platform to control lighting levels, irrigation, water, ventilation, heating, and cooling at branches. Through infrared and motion sensors, this system learns and predicts human behavior and adjusts accordingly. The sensors take into account moment-by-moment changes in weather and natural light, even identifying when the sun goes behind a cloud.

And to overcome the hurdle of increased carbon dioxide and indoor pollutants that have historically accompanied greener buildings, the sensors will monitor these levels as well. Using this collective data, the system adjusts lighting, airflow, and ventilation for maximum energy efficiency and comfort. Installing these systems will further reduce JPMorgan Chase’s electric and gas consumption by 15 percent, and water and irrigation by 20 percent.

If LEDs are installed on a wide-scale basis by 2030, they could potentially halve lighting electricity use in the U.S. This would save the equivalent gas emissions of 40 million cars, and a potential $30 billion 7. Buildings will become increasingly autonomous in the future, too, away shifting from centralized energy sources and beginning to develop their own energy through solar and wind. Some will even begin contributing back into what is known as the energy cloud, ensuring the entire electrical grid relies less on centralized energy. JPMorgan Chase and Current, powered by GE, are piloting a program using solar panels installed at branches across California and New Jersey. Overall, the collaboration will help JPMorgan Chase achieve its goal of using renewable power for 100% of its global energy needs by 2020.

When widely adopted, intelligent environments solutions like those from Current, powered by GE, have the potential to reduce U.S. energy use by six percent. The data collected and analyzed by these systems will enable companies to improve the comfort and efficiency of their commercial office buildings, and also increase the efficiency and productivity of all working in those buildings through apps that focus on enhanced space utilization and conference room management. If a meeting ends early, for example, sensors will pick up that people have left the conference area, then digitally notify other team members of space availability, allowing it to be reutilized. If the space isn’t filled again, the lighting and HVAC system will adjust to a lower-energy setting. When companies know exactly how space is being used, they can downsize or reallocate their square footage, and decrease energy-use, and therefore emissions, overall. As companies and corporations around the world turn their focus to overall intelligent environments platforms, the future promises an era of smart buildings more environmentally-sustainable than ever before.

Learn more about our commitment to sustainability and view some of our key milestones.

JPMorgan Chase has committed to source renewable energy for 100 percent of its global power needs by 2020. The firm has offices and operations in more than 60 countries across over 5,500 properties, covering approximately 75 million square feet. This will include retrofitting our branches with LED lighting for a total of 1.4 million new light bulbs, which will cut the company’s lighting energy consumption by 50 percent. Developing an on-site solar installation at the firm's largest single-tenant office may comprise up to 20 megawatts of capacity, enough to power the equivalent of 3,280 homes.