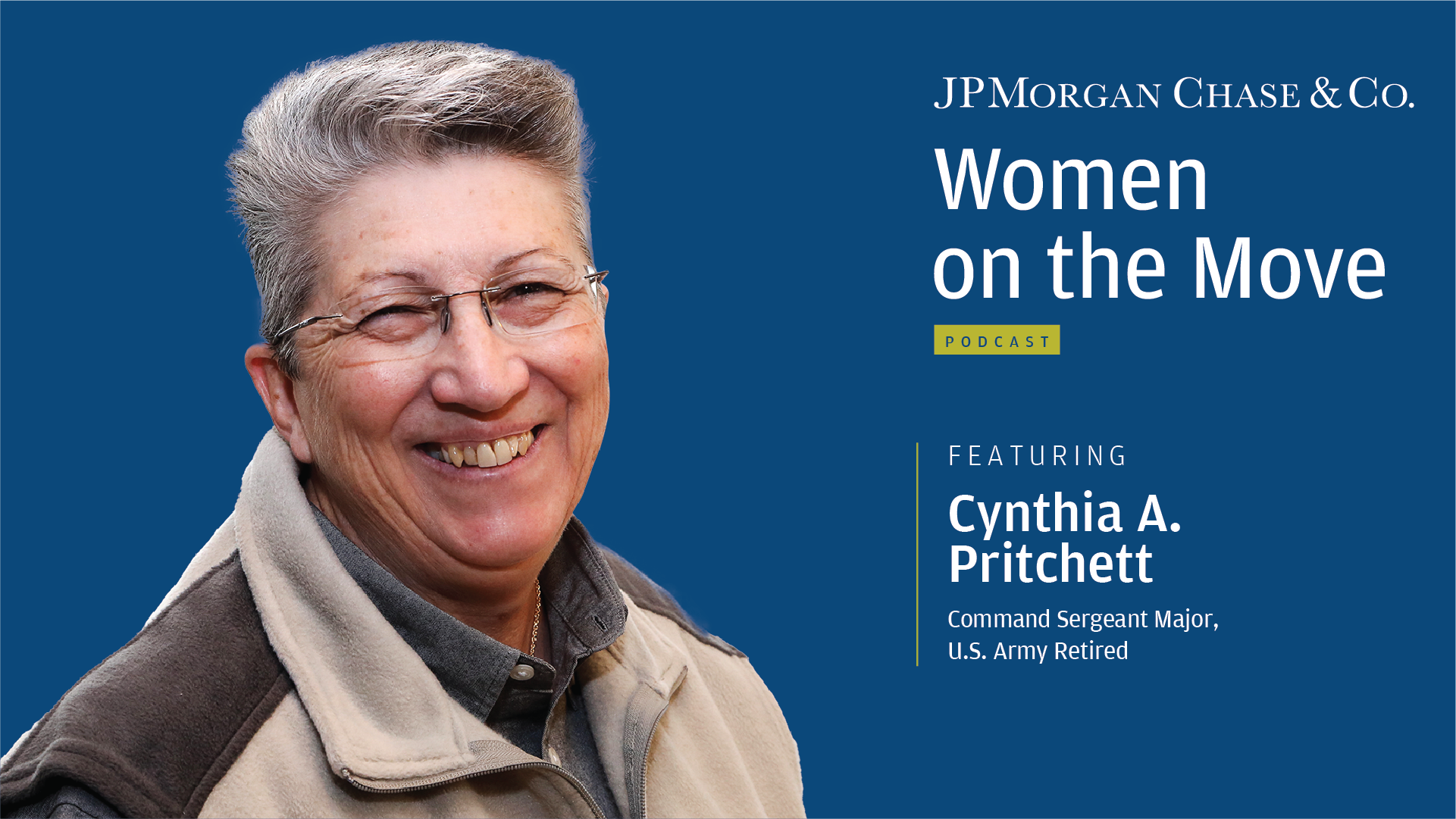 Command Sergeant Major Cynthia Pritchett is a pioneering leader in the U.S. military. In this episode, she sits down with Women on the Move podcast host Sam Saperstein to discuss her time in the military, the impact she made on military education and training, and her firsthand experience of gender integration in the army. She also shares leadership advice and reflects on her involvement with the JPMorgan Chase Military and Veterans Affairs Advisory Council.

The daughter of military parents, Cynthia joined the Women’s Army Corps shortly after graduating from high school. She tells Sam that the Women’s Army Corps was a holdover from the World War II era when women were heavily recruited. “We were actually kind of outside the service,” she explains. “So we trained separately. We were mostly in the medical field, the administrative fields, not what women are doing today.”

Norms were beginning to change when Cynthia joined the Women’s Army Corps in 1973, at the tail end of the Vietnam War era. By the mid-1970s, the Women’s Corps was being phased out and women were being integrated into the training and personnel systems of the service branches. It was during this time that male service members began to take their female colleagues more seriously.

“Women in the military didn't want any special treatment, any special advantage,” Cynthia notes. “All they wanted to be was provided the same training so that when they deployed or went into these situations, they were just as prepared as their male counterpart. And I think when we had the segregated training, there was a lot of distrust [where] male counterparts were like, well, I don't know what they're getting over there ’cause I don't see it.”

Cynthia has always placed high value on the importance of military training. As an educator, Cynthia was a transformational leader who incorporated critical thinking and analysis into her programs.

She tells Sam that the military has always valued structure,  with a focus on rote knowledge and repetitive training. “When you're under stress and crisis, you want your training to kick in, but as you become more senior in the military, things go from this rote training and reaction to, you have to [have more context],” she says. “And when we're trying to deal with some elders in the village, that's not about training; that's about education and understanding the culture and the environment you're in. So how do you educate leaders to deal in these very complex environments and not just rely on reacting to the situation on the ground?”

As an instructor, Cynthia developed partnerships with universities to get military training courses accredited so they can count toward a degree once a service member transitions to civilian life.

Since retiring from the military in 2021 after more than 36 years of service, Cynthia has served on the boards of a number of different organizations. One of the most rewarding, she says, has been her time as a member on the JPMorgan Chase Military and Veterans Affairs Advisory Council. The Council’s overarching goals are to help veterans and their families succeed. Much of the work draws on her experiences translating military credentials to civilian ones.

“Veterans do have a hard time translating back into civil society and especially into the job market,” she says. “How do you take the skills of an infantryman and translate them into something that corporate America can understand?” She’s passionate about helping veterans with housing challenges, financial literacy, and employment and entrepreneurship goals.

Cynthia explains that one of the biggest challenges has been helping veterans who have transitioned into the workforce navigate the culture differences between the military and corporate America. In the military, she says, service members learn to be part of a team and to talk about their team contributions, but not so much to talk about the individual accomplishments that they might need to highlight in their civilian careers. “It’s the whole package of trying to help veterans understand the corporate world,” she explains. “But also to help the corporate world understand the veterans, that we are not these foreign entities.”