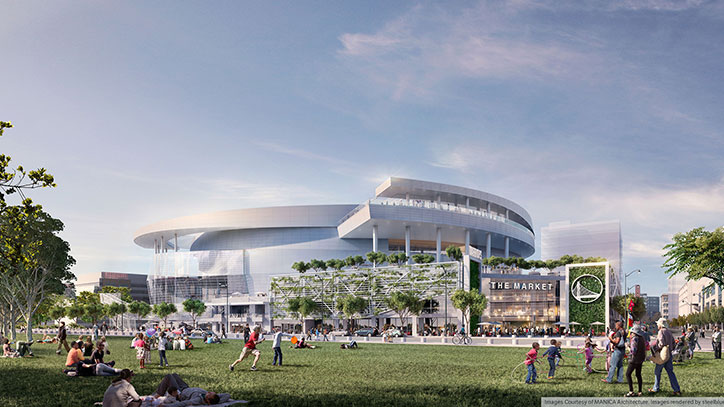 When the Golden State Warriors set out to build a state-of-the-art home on San Francisco's waterfront, they took inspiration from efforts by other teams, says Rick Welts, the team's President and Chief of Operations. They looked at what the Nets were able to build in Brooklyn, and at the ways Milwaukee and Sacramento are planning revitalized downtowns around new arenas.

But one arena in particular stood out.

"From day one, we said we wanted to build the Madison Square Garden of the West," says Welts, who spent 17 years in New York as an executive in the NBA's league offices. And he wanted that arena's partner, JPMorgan Chase & Co., involved in the new San Francisco project.

"Having watched what they've done with the relationship they have with Madison Square Garden and what they've brought to the table to make it a better consumer experience, they understand how music, sports and family shows can be a great brand association and add value to their customers," he said “They wrote the book on how to do this based on their Madison Square Garden relationship."

The Warriors announced in 2016 that their new arena will be named Chase Center under an agreement with JPMorgan Chase. In addition to Warriors games, Chase Center will host concerts, family entertainment, corporate gatherings and other events all year long.

"This is a great example of our commitment to the Bay Area and how important this market is to us," says Jamie Dimon, Chairman and CEO of JPMorgan Chase. “The Bay Area is a beacon for technology, innovation and education, and we expect that Chase Center will become a beacon of great art, culture, sports and entertainment for this great community."

Both the Warriors and Chase have "a real sincere desire to have this be a great community asset outside the walls of the arena," Welts says.

The new arena project includes offices, restaurants, stores and open space that will form the heart of Mission Bay, a long-ignored area that's now home to an extensive medical, research and academic campus for the University of California San Francisco.

A new subway line now under construction will link the arena and UCSF to downtown hotels and convention centers and to subway and commuter rail lines that serve the entire Bay Area. And the team is exploring other ways to bring people to and from the arena and UCSF.

"This is a great example of our commitment to the Bay Area and how important this market is to us. The Bay Area is a beacon for technology, innovation and education, and we expect that Chase Center will become a beacon of great art, culture, sports and entertainment for this great community."

"There was a time in San Francisco's history when we moved many thousands of people across the Bay every day by ferry," Welts says. Ferries now bring baseball fans to a dock at AT&T Park, just north of Mission Bay, and Welts says the team and UCSF will explore ways to put a ferry dock in their neighborhood too. "It's the one form of public transportation that people actually enjoy," he says.

Transit will be important, Welts says, because many fans will be following the team from Oakland to San Francisco. “What's so special about the environment we've created is not the walls of the building, but the people who are in the building," he says. “That fan support has come from both sides of the bay and we see no reason for that to change when we move to San Francisco.” The Warriors left San Francisco for Oakland in the early 1970s but about half of the season ticket holders currently come from each side of San Francisco Bay. And with thousands of people having paid to hold spots on a waiting list for season tickets, the team expects to keep selling out its games as it has for every home game since December 2012.

Welts says the new arena is designed to serve the modern fan, from food choices to technology. "People don't just expect a hot dog and a beer. They expect much better food offerings and a much larger variety." Which is why Chase Center will have four versatile kitchens instead of the one used in Oakland. And the team knows it will have to provide the latest technology, from internet bandwidth so that fans can post live photos and video to innovative scoreboards and new ways to let fans interact with game data and statistics.

The technology challenges also extend to the ways money is handled, from ticket sales to concessions and other purchases. "There's a real evolution in how transactions are managed, and JPMorgan Chase will be a great partner as we design how transactions, and cashless transactions in particular, are taking place," Welts says.

For the Warriors, the move is more than a change of address. They're leaving a building where they're a tenant, meaning the people who work in the stands and concessions and parking lots aren't team employees. “As much as we try to influence that experience, it's from a distance. We don't design the customer experience," Welts says. But the team is building the new arena itself, on land it bought, along with the adjacent offices, restaurants, stores and open space.

"People today expect a seamless experience, and we can't wait to take that on in terms of what we think we can provide in making this a great place to get to and making it fun and entertaining every step of the way."

When Chase Center opens, Chase credit and debit cardholders will have early access to tickets and preferred seating at many of the events, along with discounts on merchandise and concessions. Track the progress of Chase Center at http://www.chasecenter.com and follow @Chase_Center on Twitter.