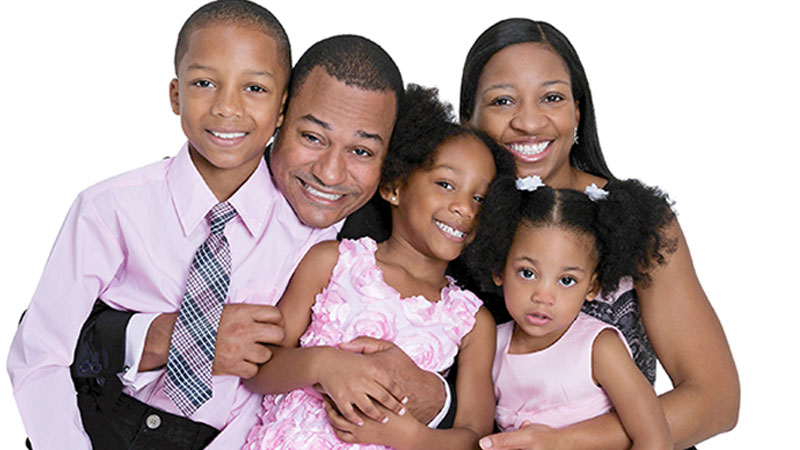 Celebrating a New Vision and Legacy for Black Fatherhood

Head of Advancing Black Pathways Sekou Kaalund on what it means to be a father today.

As Father's Day approaches, the spotlight is on dads. Whether biological or not— the fathers we celebrate are our coworkers and neighbors, our community organizers and our lawyers. They are as near as our local church or school and as prominent as the athletes and stars we see on the television and in the movies.

In our minds eye, these noble reflections should also call to mind the picture of black fatherhood. While black fathers are an integral part of our culture, they are perhaps, under-celebrated.

But what, exactly, does black fatherhood mean to the men who live in this role every day?

For Marc Morial, president of the National Urban League, the role of the father is summed up simply: “Fatherhood is embodied by a person, yes, but it's also an attitude and a frame of mind."

Morial said these words in tribute to his late father, Ernest, a leading civil rights advocate whose legacy can clearly be traced to the work of his son. In addition to his National Urban League work, Morial is a member of the external advisory council for JPMorgan Chase's Advancing Black Pathways (ABP) initiative.

ABP is devoted to helping black people realize their dreams in education and careers, while also helping them build inter-generational wealth through home ownership, increased savings and investments, and entrepreneurial endeavors. These goals are personal for Sekou Kaalund, head of ABP, who is also a father of three—Caleb, Mikah and Hannah.

In honor of Father's Day, we asked Kaalund about how fatherhood has affected him, and how he sees sound money management as a key part of fatherhood.

Q: How has being a father changed you?

A: Being a father has transformed my life. It's my most meaningful and impactful responsibility. Because of fatherhood, I strive to consistently be a better and more selfless person. From an early stage, you realize that children are observing you and learning from you by example. So now, I am more cognizant of the impact of my actions and words. My family is my priority, and I am constantly fulfilled by their unconditional love.

Q: How do you see the unique role that fathers play in their families?

A: I'm blessed to have an opportunity to raise a son; and I realize that the lessons I impart to him will be instrumental in shaping how he views himself and the world in which he lives. Obviously black men have historically had a unique and, often, difficult experience in this country. But, I'm doing what I can to show Caleb that there's a world of opportunity out there for him, no matter his race. It is also incumbent upon me to teach him that many suffered, and even made the ultimate sacrifice, to fight for greater opportunity. So it is important for him to always do his best, but also be reminded of the responsibility to help others.

The same applies to my daughters, too. Raising my girls is an equally rewarding blessing for me. I'm fortunate to be where I am professionally, and as a father, I'm focused on teaching them that they have limitless potential and can accomplish anything.

Q: Black men, as a group, have often been tagged with the stigma of being "absentee fathers." How much do you value being "present"?

A: I think the notion of black fathers being absent is inaccurate. I was fortunate to have the presence of both my dad and stepdad. For me, being present in my children's lives means much more than just physically being "at home". It's actually about actively engaging the kids intellectually. Listening to them. Supporting their dreams and helping them learn from mistakes. Achieving your dreams also means taking care of yourself, so as parents we also highlight the importance of personal wellness and financial health, which can impact each other. Spending time with them gives me strength and motivation to operate with excellence in the work that I do here at JPMorgan Chase.

Q: ABP is dedicated to strengthening the financial wellness of black families, specifically through black homeownership and entrepreneurship. Any early success stories with family men?

A: The engagement we're getting around black men talking about their visions for creating wealth is inspiring. There's such great hunger among the black men who we've connected with to build businesses and create wealth to serve the greater good. We've connected with some outstanding entrepreneurs, and I'm confident that together we are going to deliver some meaningful results in the months and years to come.

Q: You have some incredible black men, including Kevin Hart, Colin Powell, Maverick Carter and James Bell, lending support to this initiative. Is fatherhood and mentorship a topic of interest with them?

A: When I have these conversations, fatherhood always comes up in a universal sense. There's a realization that you're looking out for multiple generations and that what we're doing is going to have a broad impact on our community. So many of us, as men, aren't just thinking of our own families in our work. It's about the collective — not just "me" and "mine." We're looking to move the needle for our neighbors everywhere. Take, for instance, our focus on hiring. We're looking to hire 4,000 black students over the next five years into internships and apprenticeships. Our goal is to positively impact the trajectory of these young peoples' lives.