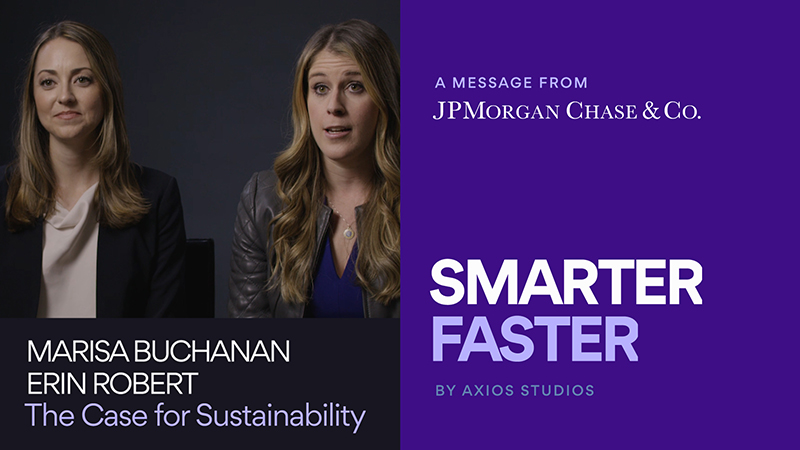 On screen: Marisa Buchanan & Erin Robert, The Case for Sustainability

On screen: A message from JPMorgan Chase & Co.

Erin Robert: Business has a role to play in creating sustainable solutions that support economic development and protect the environment.

Description: Marisa & Erin are seated on chairs next to each other

Erin Robert: And for bankers, that's what makes sustainability cool.

Voice operator: This is Erin Robert and Marisa Buchanan, executives who works in Sustainable Finance at JPMorgan Chase.

Voice operator: Their team is helping the company move towards the goal of 100 percent renewable energy and 200 billion dollars in clean financing over the next 10 years.

Voice operator: They're reducing their energy footprint across global offices and operations of 75 million square feet, the equivalent of nearly 27 times the square footage of the office space at the Empire State Building. Buchanan says she is seeing how new products like green bonds help investors finance sustainable initiatives.

Marisa Buchanan: I think it's all about finding opportunities that are commercial, that make good business sense. We want to continue to push the needle on where these efforts go, really making sustainability a part of the DNA of the way that, you know, we at JPMorgan Chase do business.

Erin Robert: And we're seeing cost of renewable energy fall, even when you remove the moral imperative associated with the integration of environmental and social issues into business considerations. These are decisions that stand on their own two feet.

Voice operator: There are three key strategies JPMorgan Chase is employing to accomplish their goals.

Marisa Buchanan: We're going to invest in energy efficiency to reduce our energy consumption as much as possible. Secondly, we're gonna be going out and looking to install solar panels. And then thirdly, we are going to be purchasing renewable energy from new projects and bringing those onto the grid.

Voice operator: Those solar installations will comprise up to 20 megawatts of capacity, enough to power the equivalent of 3,280 homes. And by retrofitting their branches with 1.4 million new LED lightbulbs, the firm will cut their lighting energy by 50 percent.